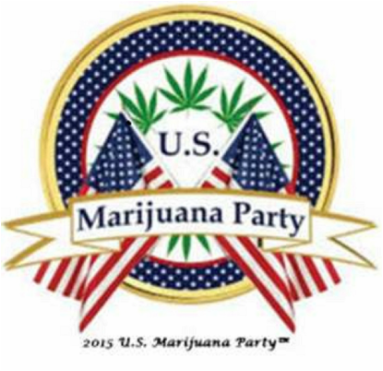 Be advised that the Platform was updated in January of 2015.  Our MAIN Issue stays the same: REPEAL CANNABIS PROHIBITION and give freedom of this plant back to it's rightful owner's, "The People"...

The USMjParty seeks to remove all penalties for adults 21 and over who choose to consume cannabis in a responsible manner.

“We demand an end to the war on productive and otherwise law abiding citizens by the powers that be who claim to protect us.”

“We demand the right to use any medication our healthcare providers and we deem fit without government interference.”

We demand the release of all people imprisoned on marijuana charges and that their criminal records be expunged. We demand that all property seized in marijuana raids be returned to the rightful owners at once. We demand that our law enforcement officers make more efficient use of our tax dollars and use the resources they have at their disposal to go after violent criminals and crimes that actually have victims. We demand the right to grow marijuana for personal consumption, just as alcohol can be brewed at home legally so long as it is not sold untaxed. We demand that you stop treating us like second class citizens for consuming something that is less dangerous than alcohol and tobacco, both of which are legal and cause numerous deaths each year. Cannabis has never caused one.

(The following was added 9.21.15)
We demand an end to the use of ‘drug testing kits’ solely for the use of identifying what chemicals or ‘plants’ that one personally consumes or puts into or on their own body to be used for discriminatory reasons by employer’s or prospective employer’s, physician’s and government officials, . The use of such testing is an invasion of privacy which is protected against by the Fourth Amendment.

We are Fighting for the Freedom From Prohibition of Your Freedom's!


The U.S. Marijuana Party will address any issue concerning Cannabis/Marijuana/Hemp
Prohibition, Human Rights and Civil Rights, as we believe in adhering to the
Constitutional Rights of all United States Citizens.

We most certainly believe in the REPEAL OF THE PROHIBITION OF MARIJUANA/CANNABIS AND HEMP!